Empire Online contains a wealth of fascinating material. Here, our team share their favourites from the collection.

I like this view of a dairy factory in New Zealand, sourced from The National Archives’ collection of Empire Marketing Board Posters. It encapsulates both the breadth of territory covered by the British Empire, as well as the motives behind European overseas expansion. 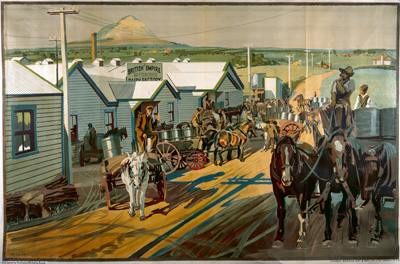 Despite Europeans (in the shape of the Dutchman Abel Tasman) setting foot on distant New Zealand as early as 1642, the origins of that country as a nominal colony can be traced back to the explorations of Captain James Cook, who claimed the coast of North Island for the British in 1769, during his voyage aboard the Endeavour. Following Cook’s charting of these attractive new islands, fertile and with a climate analogous to Britain, droves of European Christian Missionaries settled, converting many of the c.100,000 Maori population. European religious authority was soon followed by political influence when, in 1832, James Busby was installed as the 'British Resident' to New Zealand.

Soon after this, New Zealand officially became a British colony, after the 1840 Treaty of Waitangi, was struck with the indigenous Maoris, notionally ending land ownership disputes between colonists and natives. However, the treaty set the precedent for a mass wave of immigration from Britain; over 10% of all immigrants leaving between 1815 and 1914 were destined for Australasia. The land concessions to the Maori, set out in the treaty, were contravened as immigrants dispossessed the indigenous peoples of their territory. Subjugated, the Maori’s formed a nationalist movement that fought bitterly, but in vain to claim back their land, manifested through the New Zealand Wars of the 1860s and 70s.

New Zealand was granted responsible government in 1856, culminating in its formal proclamation as a dominion of the British Empire, in 1907, which essentially marked its independence. Today New Zealand remains part of the Commonwealth of Nations, with Queen Elizabeth II its acting head of state.

Under British rule, New Zealand’s fertile plains had been exploited by the colonists, as a source of wool and meat to the Empire. Dairy factories like the one illustrated above, also sprang up rapidly after the first refrigerated shipment of butter, in 1882, landed in London in perfect condition. In turn, this created a buoyant economy in New Zealand, cementing its place as a valuable asset to the British Empire.

This poster was created by the Empire Marketing Board, which was set up in 1926 to promote trade within the empire. The bulk of the service carried out by the board was in delivering market research analyses to producers. The board’s activities extended to a diverse range of publicity including films, radio promotion, broadcasting production in the colonies.

Over 40 of the Marketing Board Posters have been included within Empire Online, each suggestive of the geographical reach of the British Empire.

Explore the multitude of documents within Empire Online that shed light on how New Zealand became a colony. From contemporary accounts of Cook’s first voyage, the work of early missionaries, to colonial relations with the Maori.

The Great Exhibition of 1851

I thoroughly enjoyed delving into the abundant material on The Great Exhibition of 1851, contained in our Empire Online resource.

The two images below, sourced from the British Library, are a personal favourite, taken from the wonderful Comprehensive Pictures of the Great Exhibition of 1851, Volume 2: from the Originals painted for His Royal Highness Prince Albert. This is an excellent contemporary account of the exhibition, adorned with a host of evocative images that depict the exhibitions for many of the countries on show, each accompanied by a detailed description. 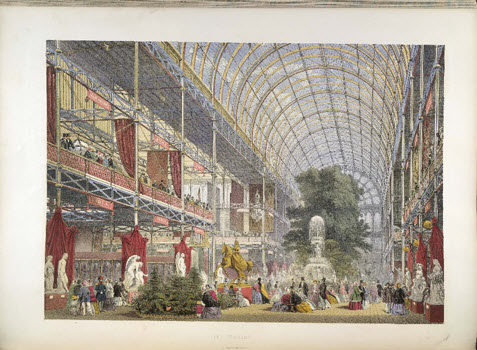 This was truly a world fair, the first of its kind, in which exhibits from nations around the globe captivated visitors with the foremost innovations of the age; where crowds could peruse 100,000 exhibits set amongst opulent architecture within the distinctive glass structure of Crystal Palace, located in Hyde Park. As I poured over the illustrations, particularly the one below, I found myself transported to the glorious atrium of this Palace in London, imagining the captivating sights and sensations those wandering through the proliferation of galleries and courts would have experienced. 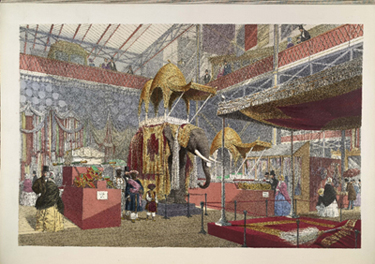 The Exhibition wasn’t just a forum for design, science and technology; it was also a melting pot of peoples and cultures. After an initial period of slow ticket sales, over 6 million people and 14,000 exhibitors attended the exhibition between May and October, which was organised, reluctantly, by Prince Albert, as well as by the Innovator, Henry Cole. This mass gathering of nationalities also drew attention to differences, creating a discernible air of xenophobia amongst many in attendance. This notion is evidenced within a piece of ephemera from the collection, sourced from the Victoria & Albert Museum. In Tomas Onwhyn’s fictional account, Mr & Mrs John Brown’s visit London to See the Great Exhibition of All Nations, the Brown’s have numerous encounters during which their previous lack of exposure to other races and nationalities leaves them in a quite fearful state of everyone they meet.

Thankfully, the controversial themes explored in Onwhyn’s account are the exception and the bulk of the literature related to the Exhibition within Empire Online focuses on the more enterprising and artistic aspects of the Exhibition. 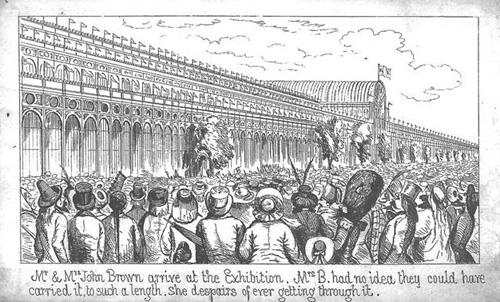 The legacy of the Exhibition is palpable. The Exhibition, conceived to rejuvenate the faltering economy, succeeded in fostering interest in design, science and technology. It not only set the precedent for the later exhibitions, but also the £16 million revenue generated (in today’s money) was used to found the Victoria and Albert Museum (initially in the form of the Museum of Ornamental Art in Marlborough House), the Science Museum, the Natural History Museum and the Royal Albert Hall.

For more guidance on the exhibition held between 1851 and 1924, and as a useful lead into the documents in the collection, see Jeffrey Auerbach’s essay Exhibitions and Empire.

Perusing our impressive collection of Church Missionary Society papers, sourced from the University of Birmingham, I was drawn to Notes from the Bishop of Saskatchewan’s Journal. Perhaps it was the striking colour of the front cover that initially captured my interest, although I was quickly absorbed by the well-written narrative that provides an informative account of missionary life in colonial Canada during the late-nineteenth century. 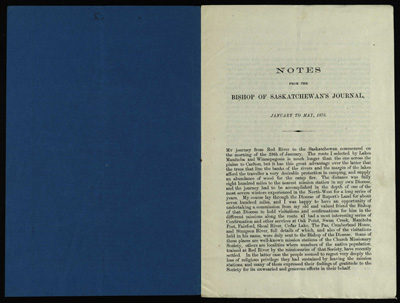 The journal recounts the journey taken by the Bishop between winter and summer 1875 from Winnipeg to Prince Albert, via Lakes Manitoba and Winnipegosis.

At that time, Saskatchewan, a province deep within central Canada, was already home to Europeans who had settled during the establishment of the Hudson Bay Company in 1774, and had been part of the British Empire since 1818.

Christian missionaries, whose principal aim was converting the Native Americans, assumed their own evangelical religious beliefs were superior to those of the indigenous population they encountered. From 1822 the Missionaries travelled through Canada spreading their religious doctrine. An approach reinforced by the Bishop when he calls for the provision of more missionaries in the Prince Albert Settlement to accommodate the large groups of Native Americans, whose “presence affords an admirable opportunity of proclaiming amongst them the blessed gospel of Christ”. 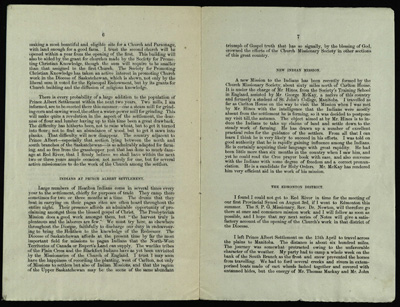 However, the journal also offers us a different angle on missionary life, not only detailing the Bishop’s professional reporting on the construction of churches at settlements, but, equally, the route he took to get there and the adventures experienced along the way. Indeed this was an arduous journey taken by the Bishop, of more than seven hundred miles, by sledge through the harsh Canadian winter. He recalls a chorus of howling from the sledge dogs upon setting camp in close proximity to a group of Native American's and their dogs; “The noise was something wonderful and sleep altogether impossible”.

We learn too of the Bishop’s amiable encounters with the Native American’s, describing a chance meeting with a group of hunters who he promptly invited to supper and who “were very attentive” during the sermon he delivered, parting the Bishop’s company with “many expressions of kindly feeling”.

My overriding impression from reading the Bishop’s journal was of the great lengths and distances missionaries went to in their efforts to convert to indigenous peoples to Christianity, suggesting the absolute commitment to their cause.  The Church Missionary Society was to remain a presence in Canada until 1930.

This journal is but one of the vast number of full-colour printed and manuscript documents of the Church Missionary Society contained within Empire Online.